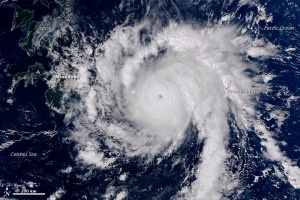 Bopha continued moving toward the Philippines on December 3, 2012. The Visible Infrared Imaging Radiometer Suite (VIIRS) on the Suomi NPP satellite acquired this natural-color image the same day. Over the previous day, Bopha moved west of Palau, and by December 3, storm clouds were skirting the island of Mindanao.

The same day that VIIRS acquired this image, the U.S. Navy’s Joint Typhoon Warning Center (JTWC) reported that Bopha packed sustained winds of 140 knots (260 kilometers per hour) and gusts up to 170 knots (315 kilometers per hour). The storm was located about 630 nautical miles (1,170 kilometers) southeast of the Philippine capital of Manila, and was moving toward the west-northwest, JTWC reported.

NASA Earth Observatory image by Jesse Allen, using VIIRS Day-Night Band data from the Suomi National Polar-orbiting Partnership. Suomi NPP is the result of a partnership between NASA, the National Oceanic and Atmospheric Administration, and the Department of Defense. Caption by Michon Scott.

A dreamer, trouble shooter, and ordinary individual who believe that life is filled with possibilities waiting to be realized, rich with meanings calling out to be understood. View all posts by Tara Buakamsri